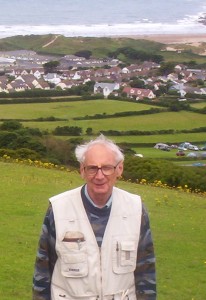 It is a great sadness to announce the sudden death of Peter Scher.

Born in the Jewish East End, Peter was the only son of Isaac, an artist and Elizabeth, a seamstress. His grandparents, Israel and Leah had arrived in Britain in 1900 from Lithuania to build a better and safer life. Evacuated from London to a ‘safer` Sheffield (which was blitzed heavily on the night of their arrival!), Peter was awarded a scholarship to Christ Hospital Public School in 1943 where he excelled, and which nurtured and developed his lifelong interest in everything. At the age of seventeen he started his studies for an architecture degree at the Bartlett School of Architecture in the University of London. This was interrupted by his call-up to undertake National Service, which he refused as a conscientious objector. This resulted in him being posted as a hospital porter for two years, the loss of his right to vote for five years, and in  his never being able to serve on a jury.

Peter’s professional career began as an Assistant Architect at J M Austin Smith and Partners and A M Gear, in 1954. His involvement in healthcare architecture began in 1958, when he became involved with the redevelopment of St Thomas’ Hospital in London. He went on from there to George Trew and Dunn where he became an Associate (1965-1975), working on South Teesside General Hospital and various major healthcare feasibility studies alongside community developments such as Winstanley and Livingstone Neighbourhood developments, incorporating over five hundred dwellings, residential homes for children and the elderly, shops, and churches. He became a partner in the firm in 1975, taking responsibility for central services, research, quality assurance and coordination of all major projects. He also took a lead role in North Tyneside General Hospital, The London Clinic, feasibility studies for Basildon and Orsett Hospitals, and the development of a Psychiatric Unit at North Tyneside.

In the early 1980s he retired from a daily routine and turned his attention to arts for health, and journalism, and was a regular contributor to the International Union of Architects Public Health Group (UIAPHG). He remained a consultant to his practice and was involved in a wide range of activities which included his role as a CABE enabler, membership of the Department of Health Design Review Panel, teaching at Hertfordshire University and conducting research. In pursuing his journalistic interests he made a great contribution as advisory editor to the magazine Hospital Design, raising the overall quality of the criticism and review of health buildings and making the journal a household name in this specialist field. He promoted a serious interest in the building response to health service change.

In addition to this he made an invaluable contribution to the Nuffield Trust book ‘Fifty Years of Ideas in Health Care Buildings (1999) to celebrate the first fifty years of the NHS.

But maybe Peter’s most passionate interest in the recent past was his work on art in healthcare buildings, notably with Peter Senior at Manchester Metropolitan University, where he was appointed as a Visiting Research Fellow (1987-2010). His prolific output and enthusiasm can best be summarised by a comment from Peter Senior who wrote:

‘Peter Scher’s interest and understanding of the power of the arts to affect people’s sensibilities together with his experience of the architecture and design of health buildings were of enormous value to the work of Arts for Health. The studies and research undertaken were invaluable in gaining trust and raising credibility in this work as it was accepted throughout the UK and abroad. `

Amongst the many projects and research works that were published, were two that particularly stand out- ‘Patient-focused Architecture for Health Care` (1996), a major study, and ‘The Exeter Evaluation` (1999), the first independent professional evaluation of a major hospital arts project (published in the Journal of Medical Ethics of the BMJ).

Peter was a remarkable man of considerable modesty with a mind that saw possibilities and alternative approaches to design often missed by his colleagues. He was passionate about the architecture of health buildings and wrote beautifully about, it and was always willing to join in debate. His ability to deliver gentle, constructive criticism of real insight was much admired.  In 2010 he was nominated for and received a Lifetime Achievement Award for his contribution to healthcare design through a long and distinguished career, and in his contribution to the promotion of the study of patient focused environments and the healing power of art. In his private life Peter ploughed his own artistic furrow, being a keen violinist, an interest he pursued to the end. He is sadly missed.

Peter is survived by his wife Anne and two daughters Lucy and Susan and sons Steven and Michael.