Nearly 50 of our members gathered in the consultants’ car park at Guys Hospital under the watchful gaze of Thomas Guy, former governor of St Thomas’s Hospital and patron of Guys Hospital. Once assembled the group was whisked away by Imogen Gray from Guys and St Thomas’ Charity which manages and organises art installations and development in the hospital group. A brief tour of some old and new parts of the buildings, entrances and hallways was conducted by Imogen who explained the role of the Charity and described the importance of integrated Art and Architecture within hospital development. Imogen then escorted the group to the Old Operating Theatre and joined us as we met with the curator and education officer in the Herb Garret, climbing the spiral staircase from the base of the clock tower in St Thomas Street. 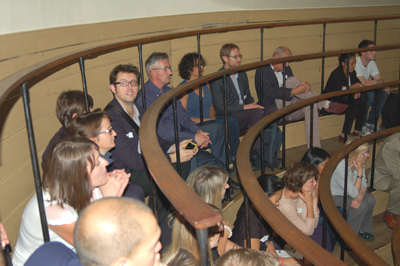 The group made their way through the museum and took their places in the stepped viewing gallery of the Old Operating Theatre to listen to the story of the Old St Thomas Hospital and the theatre followed by the re-enactment of an amputation carried out in 1824 on poor Elizabeth Regan, aged 60, who was admitted to the hospital on the 19th April 1824 with a compound fracture of tibia and fibula after being hit by a large carriage, probably in Borough High Street. For several days Elizabeth was just left in a bed and watched by the doctors, who noted that her condition was worsening.

This is an extract from the Lancet from April 1824 and documents the unfortunate story of Elizabeth Regan;

“30th April 1894 – patient rather weaker than yesterday. At half past one o’clock she was brought into the female operating theatre to undergo the operation. The tourniquet being applied and the artery in the groin compressed well, an assistant supported the limb while the operator proceeded to amputate about three inches above the knee joint. The usual steps of the operation having been completed, great care was taken that as little blood as possible should be lost. Three vessels were soon secured, the wound was dressed and the patient removed from the theatre in twenty minutes from the time she was first brought in. About four ounces of blood were lost. During the operation the patient was quite faint and brandy and wine were administered, which revived her a little. On examining the severed limb, it was found an oblique fracture of the tibia and fibula, about three inches above the ankle joint, together with extensive laceration of the integument skin extending from two inches below the head of the tibia to the inner malleolus ankle bone. No attempt at union of the bone had been set up.” 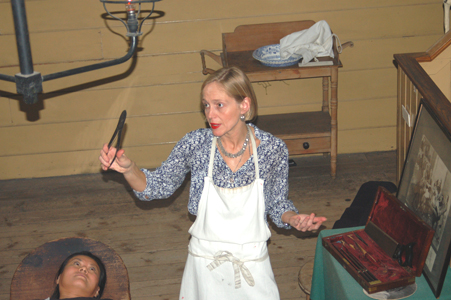 Our very able “Surgeon”, Julie (the education officer), demonstrated the use of tourniquet, knives, tenon saw and pincers on the willing “patient” (brave Marisa, who managed to smile throughout) finally bandaging her up and then sending her back to the ward with a promise of a pint and half of brandy to ease the pain.

The audience thoroughly enjoyed the gory spectacle and there were giggles and guffaws throughout. There were also many questions following the event, not only about the surgical procedure but about the theatre itself. 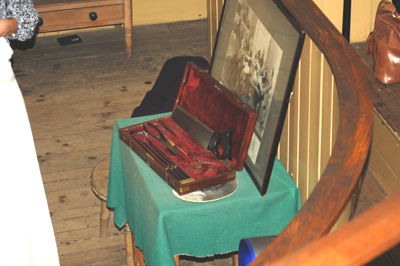 The Old Operating Theatre had survived for years without discovery before being restored to allow visitors in to explore the mysteries of surgery in earlier times. In 1862 St Thomas Hospital moved from its ancient site, eventually ending up along the river in Lambeth. The Operating Theatre, which had been built in the Garret of St Thomas Church in 1822, was partly dismantled and the entrances from the Hospital into the Garret were blocked up.

Following the departure of the hospital from St Thomas St in 1862, the only access to the roof space or attic of the church was through an opening in the north wall of the first floor chamber of the tower. This opening was about 15 feet above the floor level of the chamber which further served to aid the concealment of the old operating theatre. 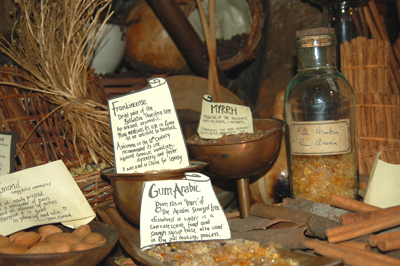 In 1956, a Mr Raymond Russell was researching the history of St Thomas’s Hospital and decided to investigate the opening into the attic. He found a ladder and climbed up into the Garret. Part of the operating theatre had been removed at some time, including all the standings, but most of the shell had survived.

Please take a look at the website which describes the history of the Garrett and Old Operating Theatre in full. http://www.thegarret.org.uk/discovery.htm 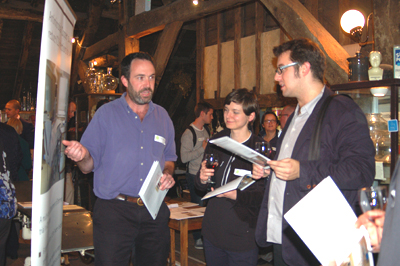 Following the “operation” and brief discussion the group returned to the Herb Garrett for a glass of wine and nibbles and a chance to speak with our hosts and with our three sponsors who had joined us to witness the amputation. There was much animated chat but also some serious conversation with our sponsors, Tarkett, AntiMicrobial Copper and Draeger as well as a chance to peruse and exclaim over the numerous exhibits of medicines and medical devices.

Very well worth a trip for all those who missed the event, so do pay a visit.
Everyone left the Garrett feeling relieved they lived in the 21st Century!

Thanks to all our speakers, sponsors and members who supported this event.

The webinar on the 25th March 2022 hopefully gave an opportunity for students and tutors to gain an insight into the SDA Awards process. To

EXECUTIVE COMMITTEE ELECTIONS The results of the recent online poll attracted votes from over 100 members. The first ballot was to ask that there be

Architects for Health was delighted to attend the hybrid IHEEM conference this year, with a stand in the main hall and a series of online